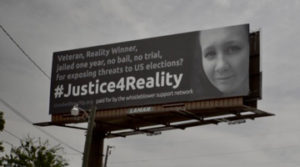 Just days after a vigil was held at the Lincoln County jail where Reality Leigh Winner, 26, is being held without bond, a billboard paid for by the Whistleblower Support Network went up on Washington Road between the turnoffs for Davis Road and Bobby Jones Expressway.

According to the state’s Department of Transportation, 38,200 vehicles travel by the site every day.

“Veteran, Reality Winner, jailed one year, no bail, no trial, for exposing threats to US elections? #Justice4Reality,” the billboard reads.