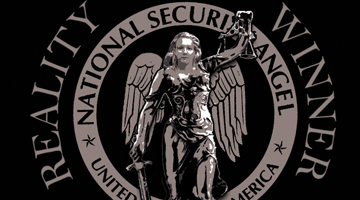 A recent Air Force veteran, Reality’s a passionate and outspoken young woman with strongly-held opinions about environmental justice,animal rights and racism. Like Chelsea Manning and Edward Snowden, she’s a courageous whistleblower who (allegedly) gave a media outlet classifed information that was clearly of public interest. The document she’s charged with sharing lies on a weird political fault line in America today—it revealed massive security vulnerabilities in US election systems that were attacked, and possibly exploited, by the Russian government leading up to the 2016 election. And it did so at a time when the President of the US claimed he had no idea what might have happened.

This political setup has left Realty facing the full force of a politically motivated US Department of Justice, determined to
make an example out of her as the rst casualty in their war against whistleblowers and the news media, with far too few outspoken advocates.

By denying Reality bail leading up to her trial, playing games with the evidence, and endangering election integrity by continuing to withhold information, Trump’s Justice Department is piling up injustices in a case that increasingly looks like it’s motivated by politics and pure spite more than any notion of the rule of law.

The prosecution’s argument goes something like this: Reality harmed US interests by leaking a classi ed document. How did releasing the document harm US interests? Because it’s classi ed. What harm was being prevented by the document being classi ed? We can’t talk about that, because it’s classi ed. In short, the jury may never have a chance to know what was actually released, and why it was vitally important for it to have been made public.

Testimony from state election o cials has made it clear they learned about the security vulnerabilities in their election systems the same way the rest of America did—by reading about them in The Intercept, who published the document allegedly provided by Reality. News reports—the kind the prosecution would like to prevent Reality’s defense from talking about—have said anywhere from 21 to 39 states were a affected by these attacks. While Reality sits in jail, the Trump administration is still distorting the truth about the security of our election systems, refusing to give states and the public the tools they need to x security vulnerabilities and ensure everyone’s right to vote. This puts all of us at risk.

It’s possible that this case will be the rst time that the protections of the First Amendment will directly go up against the 100-year-old Espionage Act in a US courtroom. It’ll likely set legal precedents crucial to whistleblowing and press freedom, and the public’s right to know about election hacking. Reality and her legal team deserve our full support in this critically important fight.